As I near the end of Garcia-Marquez’s “The Ballets Russes (BR),” I feel compelled to dedicate a posting to the choreographic contributions of Leonide Massine, choreographer and lead dancer at Colonel de Basil’s Ballet Russes from its inception in 1925 until his departure from the company around 1940.

In her book, Homans dedicates only brief passages to Massine but his tenure as choreographer at de Basil’s company produced many ballets, several of which are important and none of which are covered in “101.”

Most ground-breaking were Massine’s three symphonic ballets, controversial at the time for their use of “serious” symphonic music as ballet scores as well as for their general plotlessness. In creating them, Massine set an important precedent for contemporary ballet.

Massine said of his symphonic ballets, “I am firmly of the opinion that there is more to dancing than conveying a legend, story or fairytale, and more than simply a display of virtuosity. I believe that the harmonious form of the human body is capable of creating dynamic and graphic shapes to coincide with a symphony, in a way that is as convincing and significant as the symphony itself.”

The first of Massine’s three symphonic ballets was Les Presages, created in 1933. Set to Tchaikovsky’s Fifth Symphony, the ballet “possessed a deep level of symbolism as well as a quality reminiscent of German expressionism…expressionism as the projection of subjective tension between the individual and his environment, the tragic opposition between the subjective will and the objective rigidity of the confronting world…man’s struggle against destiny (BR).”

Les Presages tells an allegorical story in four scenes, corresponding to the four movements of the symphony.  Its characters are abstract and universal (Action, Passion and Fate, for example, are some of the main roles, a popular character-naming practice in expressionist theatre at the time) as opposed to personal or individual. Each character dances as an expression of a particular musical theme, becoming a visual representation of the music. The choreography was a unique and successful blend of classical ballet and modern dance.

Massine introduced several additional new choreographic ideas in Les Presages. The pas de deux in scene 2, for instance, was neither strictly classical (a vehicle for showcasing the dancers’ technique) nor entirely romantic (a vehicle for furthering the telling of the plot). This was the “first modern romantic pas de deux (BR),” adherent to the overall theme of the ballet but also self-sufficient as a performance piece unto itself.

Also, characters that made appearances throughout the ballet re-entered the story in the final scene, a plot-development technique copied many times over. At the end of scene 2’s pas de deux, Massine originated the “presage lift” or “press lift,” commonly used in ballet ever since. 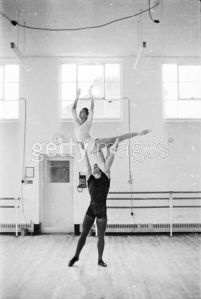 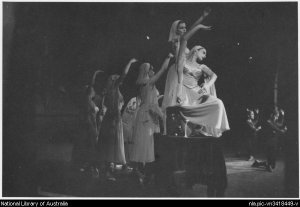 Reception for Massine’s second symphonic ballet, Choreartium, just months after Les Presages premiered, was much more divided. Whereas choreographing a ballet to Tchaikovsky’s Fifth was daring, Massine’s choice of Brahms’s Fourth for Choreartium was, to many, sacrilegious.

Perhaps the subject of the ballet added to this perception. In Choreartium Massine departed even further from the “story ballet” and delved deep into the abstract. The ballet had no plot, no time, no place. No name or characterization was assigned to any role. Female dancers were assigned roles depicting the more delicate phrases; males embodied the bolder themes. The resulting work is a truly abstract ballet, in which dancers demonstrated the music’s juxtaposition of the masculine and feminine through physical movement alone. In this way, Massine’s abstraction surpassed even that of Balanchine at the time, whose Apollon Musagete (or, Apollo, addressed in the next posting!), though plotless, still evoked a familiar subject.

Critic Arnold L. Haskell saw the value of this new approach. He said, “…Choreartium goes to show that a setting is only needed for those lacking in imagination.” He sees “birth and triumph of pure dance” in the ballet.

Although at first a skeptic, music critic Ernest Newman became Massine’s fiercest defender: “Far from disputing the position that you cannot ‘interpret’ a symphony in choreography, I go further, and say that you cannot interpret any music whotsoever in choreography. An interpretation, a translation, implies saying the same thing in other terms than the original; and it is obvious that the specific thing that music has to say can never be said in any other terms than those of music. All we can get, as between music and ballet, is correspondences, parallelisms; our gratification comes from seeing something going on on the stage that runs in harness with the sequences of shapes and moods in the music.”

The controversy in the dance and music worlds over Choreartium solidified Massine’s status as an avant-garde artist.

With Symphonie Fantastique (1936), Massine took a dramatic step back from the abstraction he attained in Choreartium. Choosing Berlioz’s romantic symphony by this name meant adopting the composer’s pre-written program. In selecting program music for his ballet, Massine aimed to capture both the psychological aspects of the story with the abstract setting. Symphonie Fantastique tells the hallucinatory story of The Young Musician whose unrequited love for The Beloved results in his attempted suicide by opium overdose. “The libretto’s extreme romantic symbolism presented the world as a metaphor for the tormented human soul (BR).”

Massine succeeded in conveying the intense emotion of the story through his choreography, which closely followed the musical cues of Berlioz’s score. He employed the idee fixe (a recurring melody that Berlioz used to represent The Young Musician’s obsession) to accompany each appearance of The Beloved onstage, although he did not create a choreographic equivalent to the repetitious phrase. He also gave each dancer a unique set of steps for each musical phrase.

Despite the controversy over Massine’s continued use of existing symphonies for his ballets, Symphonie Fantastique was deemed a success by audiences and critics alike. Newman said, “One feels, indeed, that had Berlioz had a choreographer like Massine ready at his hand it would have been in some such form as this that he would have planned to have his work presented.” 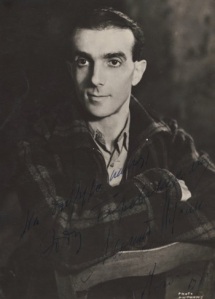 Not only did Massine contribute greatly to the repertory of ballets as the premiere choreographer in 1920s and 1930s Europe, he made lasting contributions to the advancement of ballet as an important art form. His constant search for new methods of expression led to musical vehicles and choreographic techniques that have endured throughout the last century.