I visited New York City for the long holiday weekend and caught the Saturday matinee of NYCB at Lincoln Center. It was a nice afternoon.

First on the program was Benjamin Millepied’s (yes, of Black Swan and Natalie Portman fame) “Plainspoken.” It was a decent start to the performance, though not a piece I will long remember. Aside from a beautiful pas de deux in the penultimate movement, the choreography was not exceptional. It was enjoyable – a colorful, energetic and at times playful piece – but not amazing. The overall sentiment I discovered in researching reviews of this piece (see additional resources) seem to echo this feeling; that Millepied is good but not as good as his fame would seem to indicate. Millepied is an interesting study in contemporary culture, in which crossing over to popular culture is the best formula for success. I wonder if this was always as true or if we really have made “pop” our preeminent goal.

Christopher Wheeldon’s miraculous “After the Rain” was next. I first saw this piece about a year ago, also in New York. A crowd pleaser, this ballet is guaranteed to wow you every time.

Part I is moody and precise. Three couples dance against a backdrop of what looks like a wet window pane. They stab and dart their ways around the stage, as if they are raindrops themselves. The audience is immediately drawn in. The choreography is exciting, with something new and unexpected at every turn. Part I recedes as the sun rises on Part II. The minute, magnificent Wendy Whelan reappears with her partner (originated by Jock Soto, it was Craig Hall this weekend) in a pink, sun-drenched desert world. She is tiny and naked-seeming in her translucent pink leotard, hair loose. Her partner is broad and strong. They move slowly, deliberately and with tenderness, like a couple feeling its way back to life after a time of tremendous difficulty. The audience follows their every move, in suspense, in the grip of the touching beauty of each moment. It’s a ballet not to miss.

Following a too-long discussion by NYCB Music Director Faycal Karoui of the score for the next piece, came Peter Martins’ “Mirage.” Karoui’s discussion was interesting but not well suited to a venue as large as Koch Theater. My fellow Fifth Ring (aka. nosebleed) onlookers were quickly disengaged, playing games on their cell phones. The main point to understand, I’m afraid, was that Esa-Pekka Salonen’s interesting score for “Mirage” was sure to overshadow the accompanying dancing we were about to see. I have to assume the purpose of the discussion was primarily to allow time for the rigging up of the giant “thing,” which was to be the only scenery for the ballet.

“Mirage” was the low point of the performance for me. Santiago Calatrava’s enormous “spoked, double half-circle creation spreading it ‘wings’ and quietly responding to the interacting couples below” was distracting, though not to any negative effect, since the dancers below it were endowed with practically no interesting choreography. In a piece that seemed never to hit full swing but rather to continue on and on in monotonous, repetitive movements, the NYCB dancers seemed to waste their energy. As bad as it was that I fought sleep throughout the beginning, it was a far worse indicator of the ballet’s quality that I consciously allowed myself to nod off toward the end, figuring I should rest up for the fourth and final piece. 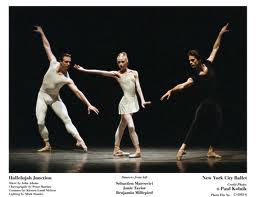 Martins’ “Hallelujah Junction,” to John Adams’ score by the same name, was the perfect remedy for my lethargy. Fast, elegant and virtuosic, the ballet’s only flaw was that it ended too soon. The dancers – four women in white, four men in black and a leading trio consisting of a couple in white and a male soloist in black – echoed and accentuated the witty banter in which two pianos upstage were beautifully engaged. Principal Sterling Hyltin is the perfect Balanchine ballerina and she executed each step with energy and precision. Soloist Daniel Ulbricht charmed and impressed as the man in black, a fiery but elegant contrast with Robert Fairchild’s grace as the man in white.