Pause: NYCB with Balanchine at The Kennedy Center

I attended a performance at The Kennedy Center on April 5th by the New York City Ballet, one of its three mixed repertory programs of Balanchine black and white ballets that the company brought to DC from New York. The evening altogether was satisfactory but by no means thrilling. As good as these ballets are, they’re the same old, same old from NYCB.

The all-Stravinsky evening began with Monumentum Pro Gesualdo, originally debuted in 1960. Although its aesthetic is typical of Balanchine – black and white practice clothes, clean lines and precision – the piece is somewhat restrained compared to his other works. There is far less actual dancing in the ballet than we expect from Balanchine, with what feels like a lot of walking and posing, beautiful as the posing was. The transitional walking between each movement was made painfully awkward by the clacking and squeaking of pointe shoes on The Kennedy Center’s unprepared Opera House stage. (Kennedy Center: please ask Lincoln Center how to solve this disturbing problem!) The piece exudes classicism and, like the score, which is less unpredictable than most of the composer’s music, it feels controlled and tame by comparison. It was a gentle introduction to an evening of more exciting works.

Movements for Piano and Orchestra

After a brief pause, the evening continued with Movements for Piano and Orchestra, which has accompanied Monumentum since 1966, when Balanchine chose to pair the two for performance. This second piece was filled to the brim with the clever playfulness that we know and love from Balanchine’s choreography, as well as the weird twists on classical movement reminiscent of Bob Fosse’s iconic, appealingly awkward style. The abstract, neoclassical dancing echoes Stravinsky’s score, which is characteristically sparse and dissonant. Stravinsky told Balanchine that this piece could have been called “Electric Currents.” Balanchine said, “Nothing gave me greater pleasure afterwards than Stravinsky’s saying the performance ‘was like a tour of a building for which I had drawn the plans but never explored the result.'”

There’s always something interesting going on in this piece and you feel that, if you watch one grouping of dancers, you’re surely missing something cool from another grouping. That’s the intellectually and visually stimulating choreography that makes Balanchine’s work so fascinating.

Check out an excerpt and an interview with NYCB soloist Rebecca Krohn.

The third and final piece before the first intermission was the lovely Duo Concertant, choreographed for the 1972 Stravinsky Festival and performed Tuesday by Megan Fairchild and Chase Finlay. A sentimental piece, Duo highlights Balanchine’s reverence for Stravinsky and for music in general as the essence of dance. The musicians – pianist and violinist – play onstage as the dancers listen, waiting at the piano for their inspiration to dance. The dancers take their cue from the musicians, whose playing seems to fill the couple with exuberance and joy.

Fairchild is a gorgeous dancer, rounded and soft but engaging and agile. Her womanly figure was well suited to the romance of the piece and it is always refreshing to see a ballerina of her caliber who looks like a woman rather than a little girl.

There was an embarrassing moment when the ripping sound of Finlay’s shoe sliding on the floor as he knelt in adoration at his partner’s feet sucked the romance right out of the air. (Darn you, Kennedy Center! Fix your floors!) 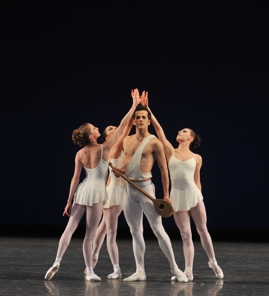 The second act Tuesday was Balanchine’s Apollo. Perhaps I am simply spoiled rotten, having recently seen a recording of Heather Watts as Terpsichore, because even the live experience couldn’t live up to the heartbreaking beauty of that 1989 performance.

The excellent Sterling Hylton, an all-Balanchine ballerina, danced the role of Terpsichore on Tuesday opposite Robert Fairchild’s Apollo, with Tiler Peck and Ana Sophia Scheller as Polyhymnia and Calliope. Aside from a jolting stumble toward the end of the ballet, Hylton’s Terpsichore was competent. Peck and Scheller were charming in their respective characters’ roles. Fairchild was an earnest Apollo.

The performance, though, did not have the ethereal beauty of the earlier recording. Individually, the dancers could not compare to their predecessors and, as a cast, they lacked a certain quality of familial cooperation that was touching in the video. 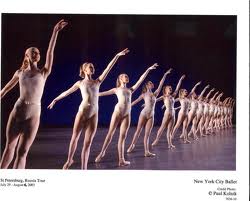 Symphony in Three Movements was an exciting final act. The ballet featured a cast of about 30 in a large-scale, fast-paced spectacle of black and white (and pink!) clad warrior-dancers. Yes, the score is more than faintly warlike, and the troops of dancers prancing and darting across the stage lends a tribal feel to the ballet, especially in its closing tableau, which resembles a totem of some kind. The dancers seem like warriors only in the sense of their strength and determination, though, and not in any sense of aggression or antagonism.

The male dancers’ airborne jumps juxtaposed with their darting, scissoring leaps were splendid and the highlight of a night that featured very little male dancing overall. Among the cast were several ballerinas with “normal” female figures (we should all be so “normal!”), which was encouraging, especially in the wake of recent criticism over NYCB’s Jenifer Ringer’s healthy weight. They outperformed one of the lead ballerinas (in a pink leotard), whose stick-thin physique did nothing to compensate for her stick-thin performance.

2 Responses to Pause: NYCB with Balanchine at The Kennedy Center