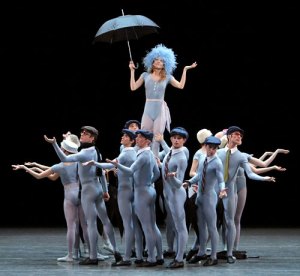 In “101,” Balanchine calls The Concert “a charade in one act,” and, indeed, the piece is like a series of comedic sketches. The ballet begins with a pianist sitting down to play, as if in a concert, and various, eccentric “audience members” (dancers) appearing on stage with their own folding chairs to observe the performance. The eccentric “concert attendees” act out the unique fantasies and daydreams that the music inspires within them, including plots of murder and deception, and imaginings of playful flight. The ballet is, according to Patricia Barnes in “Dance and Dancers,” “dance’s funniest creation.”

Typical of Robbins’ imaginative choreographic style, The Concert is subtitled, ” The Perils of Everybody.” In his program note, Robbins explained his motivation. “One of the pleasure of attending a concert,” he says, “is the freedom to lose oneself in listening to the music.” Although my personal concert experience has not included such dramatic imaginings as those of the characters in this ballet(!), I strongly relate to the idea that music’s greatest offering, especially when heard in a formal setting, is its ability to transport me to other realms, in which my imagination goes wild and often leaves me feeling newly alive. I sometimes look around at my fellow concert-goers in the darkened hall and wonder at the fact that the music, heard by all, is likely inspiring hundreds of unique reveries.