Tuesday night’s performance by American Ballet Theatre (ABT) at The Kennedy Center was pleasant enough for the price – last minute tickets sold for $25 – if not entirely inspiring. Two of the four pieces from the mixed repertory performance were nicely done if not overwhelmingly memorable. The evening also included one glowing highlight (Manon Act I Pas de Deux) – and one dismal low point (Don Quixote Act III Grand Pas de Deux). 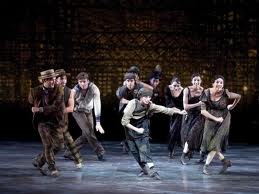 Black Tuesday was a great start to the evening. A lively, Depression-era romp depicting both the strength of the American spirit and the gritty difficulties of loneliness and poverty, the ballet is 30 minutes of spirited and expressive dancing, executed nicely by the company. Particularly moving was Misty Copeland’s solo danced to the tune, “The Boulevard of Broken Dreams.” Copeland’s dancing of desperate struggle was passionate and very beautiful. Typical of Paul Taylor, however, the sadness of this piece is more than tempered with a generous dose of uplifting humor. “He peoples his Shantytown with Vaudevillians and Doughboys, hookers and showgirls, all eking out a meager existence on the streets of the city. Music hall hoofers recall their heyday, down-and-out couples jitterbug down Park Avenue, a pimp continues to hawk his wares, and a newsgirl pretends to slay the big bad wolf that is the Depression.” (Paul Taylor company website)

This Manon excerpt, “the bedroom pas de deux,” was the highlight of the evening. Julie Kent danced with her usual perfection. Even her hair tumbling loose from its bun served to enhance, rather than detract, from the restless passion of her character. MacMillan’s choreography is lilting, romantic and technically interesting. Everything about the piece, including the minimalist set, sang an intimate portrait of a young couple in love.

Viewed outside of the context of the full length ballet, this scene is slightly misleading. Young Manon is not quite the innocent she seems. Just moments after her romantic bedroom scene with her lover Des Grieux, she succumbs to the advances of wealthy Parisian Monsieur G.M., abandoning Des Grieux. Throughout the ballet, Manon declares and then betrays her love for Des Grieux twice and compels the earnest young man to lie, cheat and murder before finally choosing love over material grandeur as she dies in his arms.

MacMillan said of the ballet, “The characters fascinate me…My clue to [Manon’s fickle, erratic] behavior is her background of poverty. Manon is not so much afraid of being poor as ashamed of being poor. Which brings me to the other theme of the ballet – the contrast between great wealth and great poverty in eighteenth-centry France…” (New Yorker Magazine 1974).

Between Balanchine, in his “101” comments, and MacMillan himself, there is a consensus that Manon is decidedly amoral – someone with “much charm but little character.” However, when considered in the context of an era when poverty, by MacMillan’s own admission, “was the equivalent of a long, slow death,” it’s hard to blame her completely for her bad behavior. Here is a teenaged girl initially destined for the convent and subject to the insensitivity of her brother’s manipulations. Wavering and rash choices do not seem unreasonable for a poor young woman in a time when being a poor young woman meant you had very few options and very little control over your own destiny.

Perhaps it’s true that Manon is a slut and Des Grieux a fool, but the context and motivations for their actions are subject to interpretation, which makes for a refreshingly layered ballet plot.

Unfortunately, the perfection of Manon was immediately followed by a bumbling performance of the Don Quixote Grand Pas de Deux. Ballerina Xiomara Reyes seemed off kilter and about to tip over straight through the curtain call. She missed several balances and fell out of some critical turns. Both she and partner Herman Cornejo came across as a little bit ridiculous, almost as though they were deliberately poking fun at the choreography. What should have been a lively and impressive display of ballet technique was instead a shockingly disappointing exercise in awkwardness.

The audience, surprisingly, ate it up. As my friend commented, “I guess all you need is some red and black, throw on some sparkles and they’ll love it!” Hard-to-please reviewer Sarah Kaufman of The Washington Post was also surprisingly more impressed – or perhaps, more accurately, less disappointed – than I was. (Read her review). 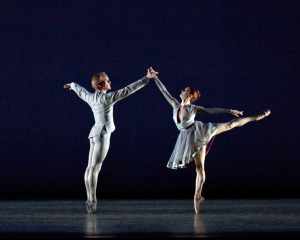 My main reason – aside from the irresistible ticket price – for attending last night’s show was to see this piece by Christopher Wheeldon, whose work so often leaves me speechless with its refreshing steps and breathtaking drama. Thirteen Diversions features brilliant partnering sequences and formations that are typically Wheeldon-esque. However, the piece did not grip or hold me in the way that others by this promising choreographer have done.

I was disappointed to miss last weekend’s fine performance by Mark Morris Dance Group of “L’Allegro, il Penseroso ed il Moderato,” which received a stellar review from The Washington Post.