It’s been many years since I last saw Hubbard Street Dance perform live (that show was staged at Wolf Trap center for Performing Arts in Vienna, VA and it was fabulous) so the company’s participation at the 2014 Spoleto Festival was the main impetus for my spending this weekend in Charleston, SC. It was worth the trip. 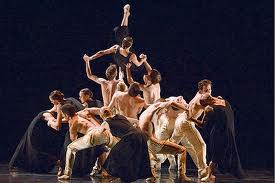 Opening the program was Nacho Duato’s “Gnawa,’ a visually stunning piece inspired by the Spanish-born choreographer’s feelings for the Mediterranean aesthetic. It was an energetic beginning to the show, danced impeccably by the group of 14. Most memorable was when the ensemble assembled in a sort of circular heap: a heaving mass of people expanding and contracting, with a dancer or dancers reaching out and sometimes flying over the formation here and there. The moment evoked a balanced sense of both community and individuality, both beautiful and life-affirming. 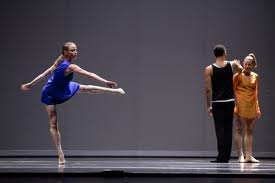 After the first intermission came William Forsythe’s “Quintett,” which the choreographer intended as a final love letter to his dying young wife. In Forsythe’s own words in a May 2012 Chicago Tribune review:

It’s not at all morbid…I think if you saw it and didn’t know the background, you’d never guess. There’s no attempt to create any pathos. The message comes from the dancers in it, a message about living and dancing.

This, I was glad to hear because I definitely didn’t “guess” the works’ inspiration. In fact, I wasn’t at all sure what to make of the piece. And I blame the music. I want to say that I enjoyed the spirit of the piece and Forsythe’s inventive choreography. However, the score – Britain’s Gavin Bryar’s “Jesus’ Blood Never Failed Me Yet” – was so repetitive and went on for so long that I lost all focus and just held on to my seat, waiting for it to be over.

The music is comprised of a short orchestral phrase accompanying a recording of an old homeless man singing a mumbled, tuneless lyric, played over and over again, ad infinitum. Perhaps Forsythe’s usual audience of Germans can better tolerate the sound. I was not the only one driven to near insanity by it. The girls behind me loudly voiced their annoyance. I eyed them for their rudeness – but I was totally thinking the same thing. Forsythe feels his piece is about the desire to live but it sure had me wanting to JUST END IT ALREADY. 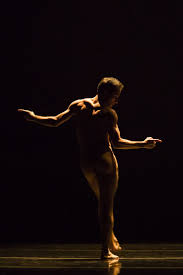 Mercifully, the second intermission was followed with Cerrudo’s PACOPEPEPLUTO. Three brief solos, one on the heels of the other, were so full of power and humor that it all ended too quickly and the audience was left wanting more. Because the piece is set to Dean Martin songs, I hadn’t high hopes for enjoying it personally, but the choreography and energetic dancers overcame my resistance immediately.

I’m not sure why the dancers were near-naked or why the lighting was so dim. A friend pointed out that suits and top hats would have seemed more appropriate for costumes. I’m all for seeing every bit of those incredible bodies work but a little more lighting would have made it more interesting in several respects! I hold criticism, however, as the performance space (a makeshift stage in TD Arena) could have been the culprit.

Completing the program was Kylian’s fascinating “Fallen Angels.” Kylian’s use of choreographic repetition stood in contrast with the musical repetitiveness about which I previously complained. Steps acquired increasing interest as one ballerina after another explored them in her own space. From Wikipedia:

Falling Angels depicts females and female dancers in their aim to achieve perfection but succumb in various stages to the human female psyche and female events such as ambition, seduction, pregnancy, birth, death, motherhood and self-awareness. It is about the things that pull and push a dancer from the ‘purity’ of dance and performance.

This statement reeks, I feel, of anti-feminism. However, by replacing its specifically female-oriented phrasing with a more universally human angle, I arrive on a truthful commentary on humanity’s noble, yet impossible striving for perfection. Complete purity, in any form, artistic or otherwise, is simply not human.