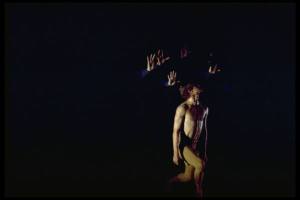 Critics agreed that At Midnight was an important moment in ballet. Reviewers describe it as if it weren’t choreographed or danced, but rather that it was an overall experience of great art. From these descriptions, the dancer-choreographer seems to have transcended his art, if only briefly.

At Midnight got its name from the first of Mahler’s “Five Ruckert Songs,” to which it is danced. The five songs (only four are used in the ballet) were based upon poems by Friedrich Ruckert but the action of the ballet does not echo the poems’ content. The motto of the ballet was actually drawn a quotation from Thomas Hardy: “In the ill-judged execution of the well-judged plan of things the call seldom produces the comer, the man to love rarely coincides with the hour for loving. Nature does not often say “See!” to her poor creature at a time when seeing can lead to happy doing; or reply “Here!” to a body’s cry of “Where?” till the hide-and-seek has become an irksome, outworn game.” The ballet’s themes of love and alone-ness are expressed in the passing movements of the dancers, as well as in the rich atmosphere of the music and stage.

Anna Kisselgoff declared At Midnight “a landmark ballet, poetic in its depth but accessible to everyone on its theatrical level. She praised Feld in her 1991 review for The New York Times: “Theatricality was always a strong element in Mr. Feld’s early works, and “At Midnight” is a perfect example of atmosphere created by spatial composition, music, dramatic lighting (by Allen Lee Hughes) and decor (a dejected figure painted by Leonard Baskin).”

As has been the case too many times in my brief endeavor with this blog, I am unable to unearth images or videos of this ballet. Even reviews and other commentary are scarce on the internet. Perhaps the lack of accessibility to Feld’s work today is in part due to his failure to establish himself as a permanent fixture in the world of great ballets. According to Tobi Tobias for New York Magazine: “At Midnight, created in 1967, and the 1971 Theatre. Both are rich works — original, intelligent, and full of feeling — that promised a distinguished future for their choreographer. Some 30 years after their making, we have seen this undeniable talent continually dissipated in pieces that are childish, gimmicky, and obsessive. What happened?”